A drawing of a dancer in St.Petersburg, and Charlotte with Moya in the Legat exhibition in Carmarthen. 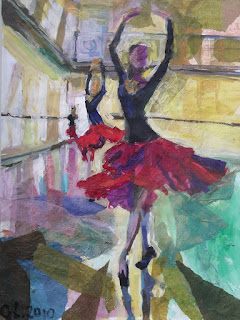 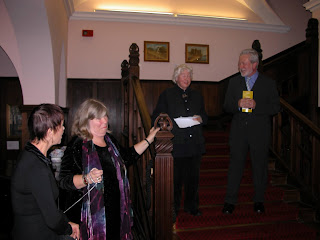 Charlotte became a Trustee for The Legat Foundation in 2009.

Like everything Charlotte did she threw herself into working as hard as she could.

Working for Legat she hosted The Legat Foundation exhibition,” East meets West” first in St. David’s Hall, in Cardiff, then she moved it to The Grand Theatre, Swansea, then to  the Museum in Carmarthen.

Charlotte was a very talented artist and had an amazing ability to draw and paint pictures of ballet dancers actually moving.

She would sit watching a performance and never take her eyes off the stage and produce the most recognizable image of the dancer dancing.

She became artist in residence for the company of Russian dancers, for which she was also Director, called Swansea’s Ballet Russe, which toured the UK and abroad, Charlotte was always there, painting the backdrop, sweeping the stage or pinning a costume, she loved every minute of it.

Charlotte’s sister Jane, went to The Legat School of Russian Ballet, where Charlotte often went to draw dancers at work.

Later Jane joined Harlequin Ballet, a small London based company of Legat trained dancers, Charlotte often drew them so her eye was well trained in the Legat Russian style of movement.

She supported all the Russian Ballet Schools which had grown from the ashes of Swansea’s Ballet Russe.

She never missed a performance given by these schools especially my school where she presented the prizes and donated a cup for artistry.

We will all miss her joie-de vivre.